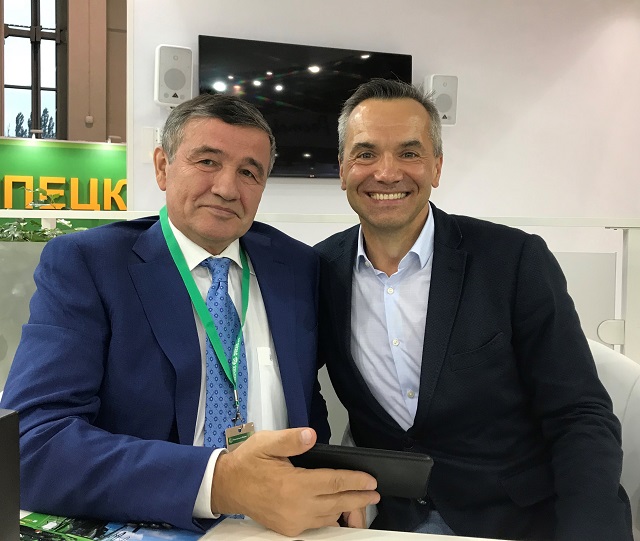 The Russian agro-industrial fair Golden Autumn of the Russian Ministry of Agriculture was held in the capital from 7 to 14 October.

This is the national sector’s key forum with more than 1,500 agricultural enterprises from Russian regions and abroad presenting their achievements among agribusiness. For the first time, there was also the Kaliningrad region’s pavilion at the agricultural fair. This year, the organisers focused on demonstrating the export potential of Russian agricultural and processing enterprises.

In attending the fair, the co-owner of DolgovGroup, Dmitry Dolgov met the Chairman of the Board, General Director of Akron, Vladimir Kunitsky. As it became known, businessmen discussed options for cooperation in terms of future fertilizer supplies to the agricultural holding company during the 2018 sowing campaign.

It should be noted that the Russian company Acron is one of the world’s leading producers of mineral fertilizers, and cooperation with it is a big step towards the stable development of agribusiness, which is especially valuable for the Kaliningrad region’s agrarians against the backdrop of the difficult harvest situations over the last two years.

The agricultural holding company DolgovGrupp handles about 94,000 hectares of arable land in the Kaliningrad region and annually purchases a significant amount of fertilizers. Today, it is about 20,000 tons of ammonium nitrate and more than 12,000 tons of azofosca, carbamide-ammonium mixture as well as other complex fertilizers.
← Назад к списку новостей