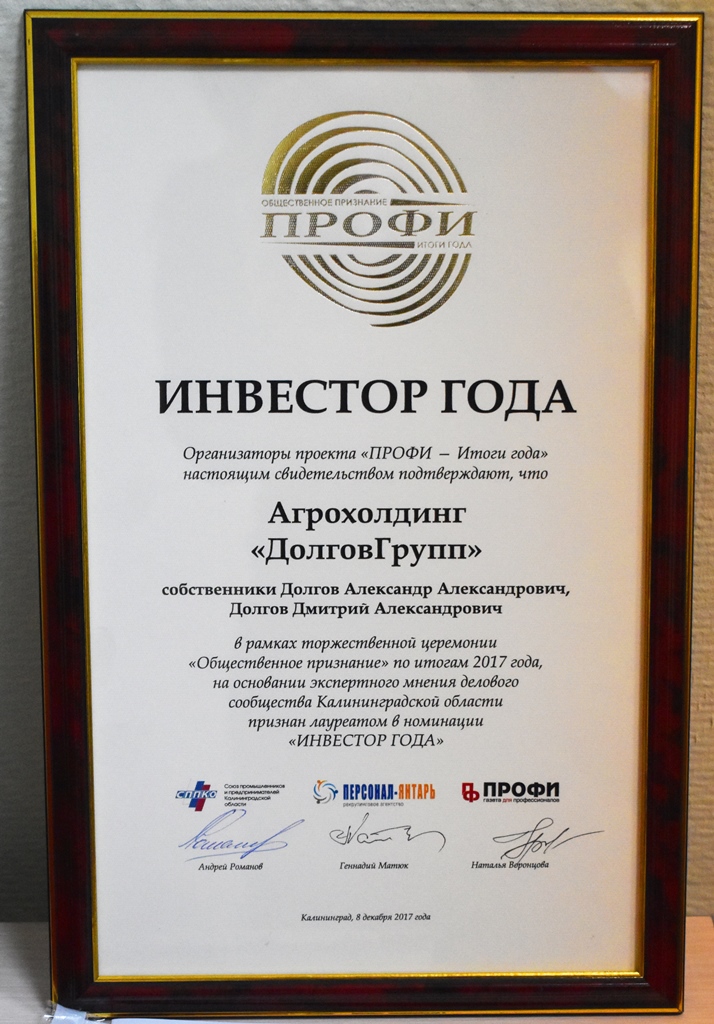 DOLGOVGRUPP BECAME A WINNER OF THE 2017 TOP GUN RESULTS PRIZE

The Kaliningrad region’s business community experts recognised the agricultural holding company as one of the best in the Investor of the Year nomination.

The awarding ceremony of the 2017 Top Gun Results was held on Friday, December 8, at the regional cinema Zarya.

For the first time this year, any Kaliningrader could participate in the determination of candidates in the competition for the Top Gun 2017 award. More than 3,000 people made their choice online. The results of the vote were evaluated by ten members of the expert council consisting of the previous years’ prize winners as well as the region’s vice-governor for internal policy, Alexander Torba. The honorary guest of the ceremony was governor Anton Alikhanov who presented the diploma of the winner to the co-owner of the agricultural holding company DolgovGrupp Dmitry Dolgov.

- It was a difficult year for rural workers; the Kaliningrad agricultural sector was faced quite a tough time in the form of rains, frosts and crop failure but I am sure that the next year, 2018, will be much better and more profitable, Dmitry Dolgov said. - We hope for the best and are not afraid of investing whole lot of money in the development of our business even in these difficult times. In 2017, we opened a new feed mill in Gurievsk, launched a new broiler production in the Krasnoznamensky municipality... There are still many plans and projects that will soon be implemented. We are pleased that our region’s colleagues and ordinary residents keep monitoring our development and celebrate our success’, the owner of the agricultural holding company added.

For the first time this year, within the framework of Top Gun Results of the Year, a contest for the best corporate film was launched. The final involved the works of 30 Kaliningrad entities. In this difficult competition, the agricultural holding company DolgovGrupp won two awards at once, The Best Corporate Video up to 10 Minutes - Nezhinskaya Dairy as well as The Best Corporate Film about a Company or Industry for more than 10 Minutes.

It should be noted that Artem Ryzhkov, art director of the cinema Zarya, a member of the jury of the Short Film Festival Koroche (Shorter), determined the contest nominees.

For information, the Top Gun Results of the Year business award was established in 2003 and since then it has been annually awarded to the best representatives of Kaliningrad companies, managers who achieved the most significant results in the year coming to an end. The nominees are proposed by the region’s economy experts, heads of business associations, relevant executive authorities, municipalities and the media.
← Назад к списку новостей