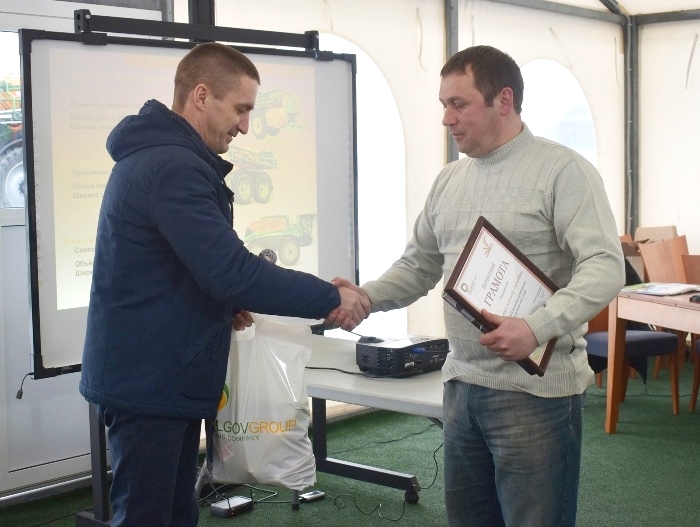 Only a couple of weeks are left until spring sowing in the fields of the Kaliningrad region. On the eve of the event, by tradition, the best employees of the plant-growing industry received awards following the 2017 results.

The event was held on Monday, February 19, at the main office of the company in Nesterov. This time it was decided to encourage the five best employees of the mechanical operations department of the central office:

- Sergey Kondrakov as the best mechanic of 2017;

- Stepan Koposhko as the best combine operator of 2017;

- Alexander Shekhovtsov as the best mechanic of 2017;

- Yevgenia Anisimova as the most promising machine operator.

Petr Luzikov, head of the machine operators’ unit, presented diplomas and presents on behalf of the company.

- Similar events have already become a tradition and we support this because the agricultural holding company is big, it is necessary to take care of our high-value personnel, he said. - This year we decided to award in five nominations the most responsible and hardworking machine operators. One of them, by the way, has been employed by the holding company for more than 15 years, and it could not be left unnoticed.

Luzikov stressed that now, at the beginning of the spring sowing season, a training course is conducted for all the holding company’s machine operators in five areas including the application of new technologies in chemical protection, processing, sowing and harvesting. By the way, this time a specially invited professional from Germany told the Kaliningrad machine operators and farmers about the innovations and specifics of the work.

We should note that by the beginning of the spring, the seeding agricultural holding company is actively recruiting personnel for various agricultural specialties, such as tractor drivers, combine operators, machine operators, agronomists, veterinarians, livestock farmers and others.

- We are trying to recruit young specialists because the agricultural holding business is working for the future, and we are ready to train them in all the subtleties of operation of high-performance and modern machinery, Petr Luzikov emphasised.
← Назад к списку новостей