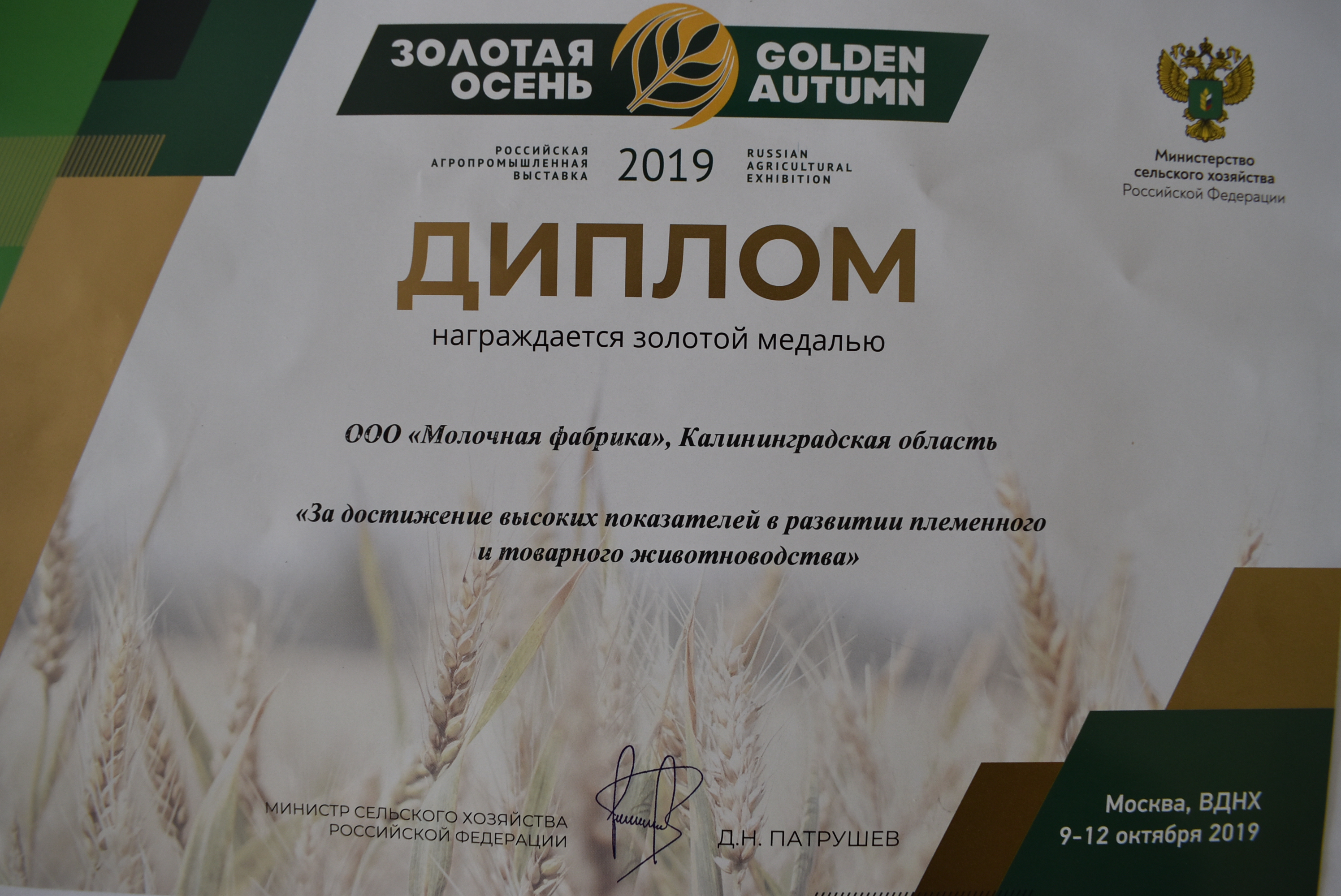 Dairy Factory LLC, which is part of DolgovGroup agricultural holding company, was awarded the gold medal of the Ministry of Agriculture of the Russian Federation.
A high award was presented to the enterprise at the Russian Agricultural Exhibition Golden Autumn - 2019 held on October 9-12, 2019 at VDNKh (Exhibition of Economic Achievements) in Moscow city. The high performance of the enterprise in the development of livestock and commercial breeding are noted in the Diploma, signed by the Minister of Agriculture of the Russian Federation D.N. Patrushev.

Let us remember, that Dmitry Nikolaevich on October 10, while visiting the platform of DolgovGroup agricultural holding company, highly praised the work of the enterprise, which presented to the participants of the exhibition bulls of elite breeds of high breeding value: Aberdeen Angus, Charolais, Limousin breeds. The minister was told that the Dairy factory of the agricultural holding company is the only agricultural enterprise in Kaliningrad region that has the status of the pedigree breeding unit for four cattle breeds.

Today factories and farms of the company contain about 12 thousand heads of meat and dairy breeds. Breeding animals are grown according to Hungarian technology in conditions as close to natural as possible. From May to October, they graze in the field, and from October to May they are kept in pens, yard housing. The mass of adult bulls reaches more than a thousand kilograms. The Factory provides not only itself with highly productive young cattle, but also sells it to other farms, including outside Kaliningrad region.

It should be added that, traditionally, tasting and competition commissions work within the framework of the Golden Autumn exhibition - experts evaluate the results of the work of sector representatives in many categories.

Thus, this year at the exhibition the results of almost 20 competitions of the sector were summed up. In particular, the most striking achievements were noted in the production of high-quality food products, the manufacture of high-quality feed and additives, medicines and medicinal products for veterinary use, the cultivation of crop products, the development of highly efficient agricultural machinery and others. And also in the field of development of livestock and commercial breeding, in which the activity of DolgovGroup was awarded with the gold medal at the Russian level.
← Назад к списку новостей