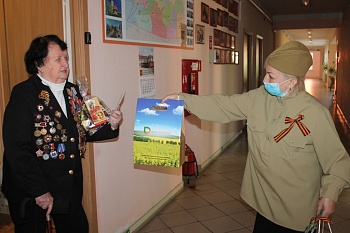 On the day of the 75th anniversary of the Great Victory from the DolgovGroup Agricultural Group presented food gift baskets to veterans of the Great Patriotic War living in the social and health institution Kaliningrad Regional War Veteran Hospital.

Today, 58 veterans live in the hospital, and each of them received dairy and meat products from the Group and its branded store network Nash Produkt. Those are famous brand Nezhinskaya yoghurts, cottage cheese, sour cream, cheese, dessert and curds as well as Rominta sausage.

On the same day, the governor A.A. Alikhanov congratulated the veterans who were on their balconies. The region’s governor thanked the heroes for the feat, wished them good health and long life.

During the ceremonial part, the volunteers and the Young Army Cadets took out an icon lamp with eternal flame lit at the 1200 Guardsmen Memorial Site, the banner of Victory and the State flag of the Russian Federation.